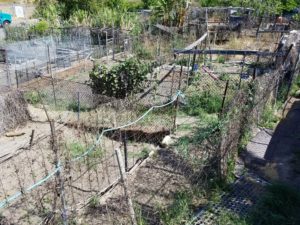 Currently approximately 67 gardeners do not have equal water distribution. While others are fine and enjoying the Spring, there is another section that has been dead for 9 months.

The San Pedro City Manager Nicole Deering is the one accountable to get this fixed. Many meetings with her have not yielded results yet.

The City does however, require all 67 gardeners to still pay their yearly fee, or face late fees and the possibility of losing their garden.

We pay for the city to provide water. Just image paying for water at home, not getting any from the city, and then having to still pay for something you don’t get. This is unjust by the San Pedro City.

Nicole has mentioned resolving this issue could take as long as 2 years. According to her, we have to pay for the privilege of having a garden and just have to deal with trekking in water until the City can get to it. Many gardeners are older and this is not feasible, and this is well known to the city.

The gardeners do not have a favorable opinion of the city because of the politics they play. They have had numerous calls to get this fixed and nothing seems to get done, or get done fast. Fixing a pipe does not take 9 months even for city government.

The City of San Pedro needs to be more accountable for this water inequality. The longer the solution takes, the more they favor inequality. We are better than that.